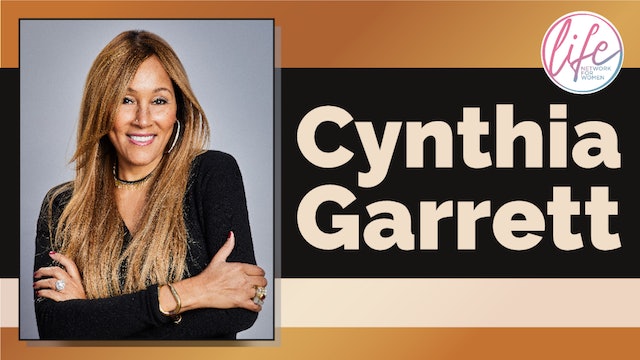 Long-time network television host Cynthia Garrett has been breaking barriers throughout her career! She became the first African-American woman to host a network late-night show with NBC’s LATER w/ Cynthia Garrett and currently hosts & produces The Sessions w/ Cynthia Garrett, airing weekly around the world on TBN; the world’s top faith and family network. Now she has brought "The Sessions with Cynthia Garrett" to the Life Network for Women to be available every Thursday at 1:00PM EST and then On Demand!!!

She is regularly seen on FOX News on ‘The Ingraham Angle’ and most recently ‘The Story w/ Martha McCallum.’ A prolific writer, her Opinion Pieces & Editorials are often seen in NEWSWEEK and other publications.

In 2016, she published her autobiography, Prodigal Daughter: A Journey Home to Identity a riveting and transformational chronicle of Garrett’s real-life adventure story, applied to scriptural lessons, that leaves readers forever impacted and changed. Her second book, I Choose Victory: Moving From Victim To Victor, was released May 2020 (Salem/Regnery). Instead of becoming a victim like many others, however, she chose to be a
victor.

A Career Look Back:
Cynthia, began her career on VH1 where her skill and her relationship to brother, Lenny Kravitz, provided a world of access to music stars. She interviewed nearly every music legend of our time; Mick Jagger, Prince, Aretha Franklin, Madonna, Elton John, Justin Timberlake and many more before going on to host a wide variety of network TV, entertainment, sports, and news shows for NBC, CBS, ABC, FOX, Sony, HBO, Paramount and more.
Cynthia, soon became the first African-American woman, to host a network late-night TV show: NBC’s LATER w/ Cynthia Garrett. On LATER, she sat down, for her signature one-on-one interviews, with major actors, sports figures, and politicians for a half hour of fun, depth, and chat, that put the late-night show back in the ratings after its fall-off from Bob Costas and Greg Kinnear.

Cynthia, fronted many other Cable and Network productions such as: OSCAR Red Carpet specials for ABC, her own HBO red carpet series called THE BUZZ, Hollywood Insider for TV Guide Channel, Sony Daytime talk-show Life & Style, The HOMETEAM w/ Terry Bradshaw & Cynthia Garrett on FOX, CROWNED on The CW Network, and sat in numerous times with Regis Philbin on ABC’s LIVE in the hunt to replace Kathie Lee Gifford. Cynthia has hosted far too many Primetime, Network TV, Sports, News and Entertainment specials to mention!

As a writer Cynthia was the first celebrity columnist for In Style Magazine, penning her own bi-monthly column. She also wrote a monthly column for L.A. CONFIDENTIAL Magazine.

From Michael Jordan & Denzel Washington, to Donald Trump & Meryl Streep, Cynthia’s natural ability to relate to people has made her a favorite interviewer and talk personality for years. Her ‘celebrity’ friendships, which continue till today, reflect the respect she has garnered through her years in entertainment. Sharing, from her many life experiences, together with an application of her faith, is a passion that has placed her in front of millions of TV viewers as teacher, journalist, host, advocate, sister, mother, and friend!